In these next two posts, I’ll discuss education from pre-k through high school. Disparities in educational opportunities are one of the largest drivers of Philadelphia’s inequality. First, let’s take a look at the Greater Philadelphia Region. I will use a very simple measure—money.

Many people I speak to claim that the School District of Philadelphia is “flush with cash,” insisting that we ought to privatize the school district or reduce funding. This is a plainly false claim, and I can show where this misunderstanding likely comes from. First, note that Philadelphia is by far the largest school district within the tri-state area. 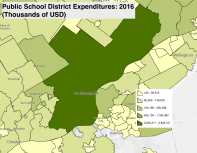 I think the people who express the idea that Philadelphia’s schools are drowning in cash must be thinking of things purely on the aggregate. However, when you look at the per pupil expenditures, we have a completely different story. 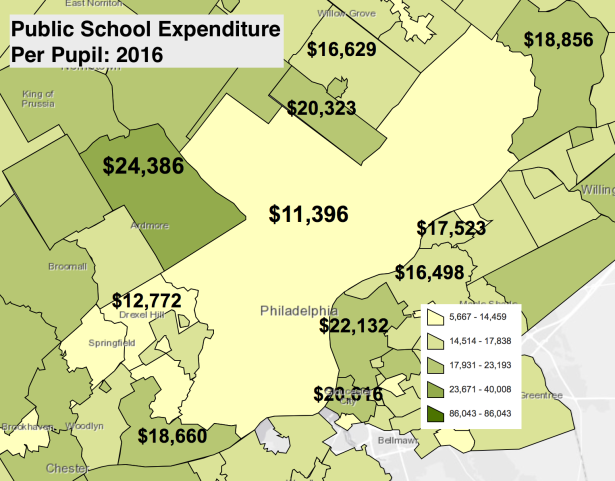 I’ve labeled several of the school districts for reference. The largest gap locally is between Philadelphia and Lower Merion (directly to the northwest). But across the board, we can easily see that Philadelphia has the lowest amount of money per student to spend out of all of the regional school districts. This disparity can be larger than a factor of two. So, Philadelphia’s school district is actually quite poor compared to others. In fact, Lower Merion and other suburban districts could be considered to be “flush with cash.”

Where does this disparity come from? Well, I pulled data from the same database that shows the breakdown of each school district’s revenue sources. Below I’ve compared Philadelphia and Lower Merion to give a sample. These dollars are in thousands of dollars, so think millions or billions. 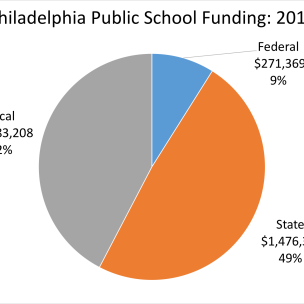 This difference in funding sources is critical to note. Philadelphia overwhelmingly relies on state funding for its schools, while Lower Merion (and similar suburban districts) rely heavily on local revenue, i.e. property taxes. Of the local revenue portion, property taxes accounted for $199,597,000 in Lower Merion (82% of the total) and $697,540,000 in Philadelphia (23% of the total).

This gap is, of course, due to the gap in property values, which is, in turn, due to gaps in wealth and income. The 2012-16 American Community Survey 5-Year Estimate reports that the median value of a house in Lower Merion was $558,600. Philadelphia’s was just $147,300.

Other outcomes are trickier to measure and compare, but there are a couple of statistics from the School District of Philadelphia that are very telling. In 2016-17, 47% of children in K-2 were at reading level. Only 78% of students in traditional high schools graduated. And so on.

Overall, it is clear there is an immense gap in performance and quality between Philadelphia’s schools and Lower Merion’s, and it’s a similar situation for most of the surrounding areas. It is no secret; this is the reason why families who can afford to typically settle outside the city when they have children. I argue this gap is almost entirely due to the funding disparity, since Philadelphia’s schools are by far the lowest funded in the area. Further, this gap in funding is due to our country’s overall reliance on local funding for schools, rather than state and federal dollars. Therefore, regions that have low incomes, and therefore low property values and taxes, will have low quality schools.

In my next post, I’ll talk about disparities just within Philadelphia. I found out, like with many topics, that school funding and performance is incredibly complicated. So I had to split this up for my own sanity.

To promote awareness and public discussion of critical social issues through well-researched, in-depth, intellectually honest articles on a public forum.